There’s an old saying that reads, ‘You just have to keep driving down the road. It’s going to bend and curve and you’ll speed up and slow down, but the road keeps going.’ Well, after four days of gruelling off-road driving from Cape Town’s world-renowned winelands to the hustle and bustle of big city life in Johannesburg, that saying couldn’t be more fitting for the journey Ford South Africa sent me on.

My meeting point for this adventure, aptly named the ‘Gravelog’, was at the pristine Meerendal Wine Estate in Durbanville. The fleet of vehicles selected by Ford included two Ranger XLT’s, two Wildtraks and two Raptors. Seeing all the 4x4s lined up to meet me, it was hard not to feel slightly intimidated by their bulky stature and all that power. However, after taking a few minutes to familiarise myself with the 4x4s, that uncertain feeling quickly turned into awe – and excitement. Before setting off on our Gravelog, me and the rest of the pack were treated to a fresh, country breakfast, courtesy of the folks at Meerendal. It was during breakfast that I started to get to know the colourful group of people taking this journey with me, from motoring journalists to up-and-coming South African vloggers. The men in charge of safely navigating us from Cape Town to Johannesburg were led by head-driver Gideo, lead navigator Manesh, and the world’s best bush mechanic-doctor and jokester, Bertis.

I chose the Ford Ranger XLT for the first leg of the journey. It was my first time driving for an extended period on gravel roads, so I thought it best to start out with the least powerful, but still comfortable XLT model. This turned out to be a great choice, as it gave both my co-driver and me enough time to properly get to grips with the 4×4. Making the switch from my old VW Golf to the brand new Ford Ranger meant I had to get used to a few new things, such as the XLT’s hyper-responsive steering and breaks. But after about 15 kilometres of twisting gravel roads, my confidence in the vehicle had grown ten-fold.

Our first leg of the Gravelog saw the convoy take a detour through the quaint town of Darling to a farmer who was gracious enough to donate over 50 hay bales to another farmer in need after the recent droughts. The problem was that the two farmers were separated by well over 500 kilometres of mountains, dunes, and wildlife. That’s where our Ranger convoy came in. The farmer in need of the bales was only a 10-kilometre detour off our original path, so we gladly accepted our new jobs as the bush-delivery service. Our next destination of note was the town of Redelinghuys, where we stopped for lunch at Affi Plaas. This charming, pet-friendly BnB, was surrounded by luscious plant-life and greenery, a welcome change after driving through dry and sandy landscapes for five hours.

After lunch and a much needed leg-stretch, it was time for our first Gravelog driver swap. To curb driver fatigue and give us all a chance behind the wheel, we’d established that there’d be two driving shifts each day, so we’d always have a co-pilot. I got a break to take in the landscape, and also had a chance to play around with the Ranger’s entertainment system, using voice command, connecting my phone to Apple Car Play for the must-have road-trip playlist, as well as many other functions that come with the XLR.

After another five hours of off-road driving we began to see signs of where we’d be spending the night. Our first clue was the ominous silhouette of what looked like a pirate ship on the horizon – mind you, we were in the Little Karoo. Our next clue was the seemingly random humanoid statues dotted all around us. Once we reached the apocalyptic-looking entrance it all began to make sense. We would be spending the night at the AfrikaBurn festival grounds in the Tankwa Karoo National Park. Unfortunately for us, AfrikaBurn would only be taking place between 27 April and 3 May 2020, so we were a bit early for the celebrations.

After settling down in our surprisingly roomy tents it was time to let our hair down and have some fun. This included a trip up to a look-out point on a mountain to watch the sun set majestically over a sea of never-ending hills and dunes. Then it was time for dinner. Delicious chops, pap and veggies were on the menu, with an open bar to help wash it all down. This shrine was erected at the top of the lookout spot on the mountain. Once the sun has passed through the centre of the wheel and behind the horizon, it signifies the start of a new day. Image: Kyro Mitchell. One of the first signs that this was no ordinary camp site. Image: Kyro Mitchell.

After a surprisingly good night’s sleep in the tents, we woke up to a classic bacon-and-eggs breakfast, accompanied by the sound of scampering footsteps running around in the bush. Soon we set-off for the next leg of our journey: delivering the hay bales.

Located a few hundred kilometres from AfrikaBurn, it was no easy feat getting to the drought-stricken farm. Thankfully, the Ford Rangers were able to handle everything put in front of them, including a couple of steep mountain passes and more sheer drops than I could count. This was without a doubt the toughest part of the journey. The stress of trying not to lose any hay bales along the way didn’t make the drive any easier, but our Ranger fared well.

Finally getting to the farm in the Namakwa District was a huge weight off all our shoulders because it meant we had completed the biggest detour of the Gravelog. More importantly, however, it meant the farm animals would get their feed. As a matter of fact, the farmer told us that the hay bales would feed his animals for about a month, during which time the rains are scheduled to come, giving his crops about two weeks of undisturbed growth. After what seemed like an eternity behind the wheel we reached our home for the night, Ganora Guest Farm & Excursions just outside Nieu-Bethesda. Expecting to sleep in tents again, it was a relief to see we’d have some sturdy cover overhead with running water and electricity! Besides the 5-star lodgings, we were treated to a dinner of mouth-watering Karoo lamb with roasted potatoes and beetroot.

The next morning started we were treated to an insightful and totally unexpected tour of Ganora’s extensive 280-million-year-old fossil collection. Who knew the dry Little Karoo semi-desert was once was swampland?

On the third morning of our Gravelog, instead of being woken up by the relaxing sound of chirping birds, it was the constant cries of the roaming sheep that did the job.

Another day of gruelling driving lay ahead, but thankfully it was our turn in the BiTurbo diesel, 157KW Ford Ranger Wildtrak. First getting into the Wildtrak, I couldn’t help but notice the small differences inside the cabin, such as the bright yellow stitching along the dashboard and the electronically controlled seats. I remember thinking that this 4×4 was a lot more serious than the XLT Ranger I’d driven previously. After waving goodbye to Ganora Guest Farm, it was time to put some serious kilometres under our belt.

Aside from a few stubborn cows not wanting to get out of the way and a small detour to an abandoned railway station in Xhariep in the Free State, the Gravelog was all smooth sailing for the rest of the way. That night, we found lodgings at the 4-star Otterskloof Private Game Reserve, home to kudu, eland, impala, and zebra among other wildlife. Dinner that evening was held in a special dining area with a Game-of-Thrones-inspired dining table. Seeing as this was our last night together, we decided to place our phones in the middle of the giant table and the first person to reach for theirs would have to pick up the tab. For a group of journalists and influencers, this task proved much harder than you might think. However, it was during this short sabbatical from our mobiles that we decided to give thanks. One by one we each took hold of the ‘talking-candle’ and spoke about what we’d learnt from the Gravelog. We felt we’d all grown a bit, and helped make a difference. Our final leg of the journey will be remembered for having the most driving time for the entire Gravelog, but this didn’t faze me or my co-pilot because it was finally our turn in the 10-speed, 2.0-litre BiTurbocharged diesel Raptor.

Spying the bright red dials and paddle shifters, I was keenly aware that I’d climbed aboard a built-for-off-road machine. Aside from the raised body, and flashy Raptor stickers plastered on the vehicle, the specially developed chassis, which was designed to withstand the rigours of off-road driving, gave me the full confidence to throw the vehicle into corners without having to worry about the back end slipping out, or worse yet, flipping the vehicle on these less-than-ideal roads.

Our final day of driving saw us stop for a quick lunch in Klerksdorp where, yes, even they suffered from the dreaded load shedding. With the help of a few generators, we were able to get some food and refuel before powering through the final leg.

In what seemed like no time, we were just outside of Krugersdorp. An hour later we’d run out of gravel road and were approaching the big city. It was here that the voice of our lead-driver, Gideo, came over the radio to give us the good news.’Alright guys, Lanseria is just a couple of kilometres away!’ I didn’t quite know how to react to that message. I was relieved that our endless hours of driving were finally about to come to an end, but I knew I would have to say goodbye to the people with whom I’d spent an awesome, adventurous week. No more crazy campfire stories, hilarious inside-jokes or the never-ending banter over the radio. Just a few kilometres outside of Joburg we stopped for one final picture of the vehicles. Image: Kyro Mitchell

The mission given to us by Ford South Africa was to prove that its Ranger series is capable of driving you from Cape Town to Johannesburg without the need for tarred roads. And while there were a few a close calls along the way, the Ford Ranger series managed to deliver us all safely in comfort and style, proving their vehicles truly are #BuiltForTough. 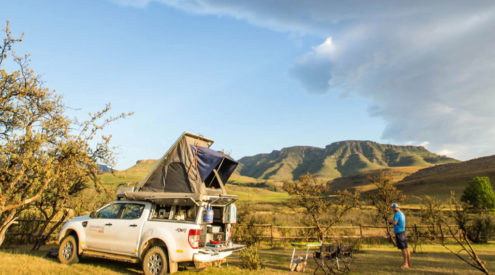 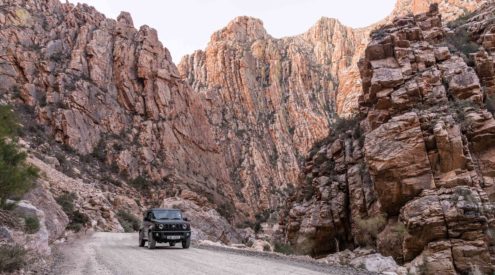 The art of road tripping