It’s good-looking, it folds up and the motor assists you with pedalling. Adel Groenewald finds it difficult not to love Cycology’s A2B Kuo electric bicycle.

In a country where petrol is getting worryingly expensive and where green mobility is the talk of the town, there are few things as appealing to me as an electric bike. It’s a sexy bicycle that you can pedal around as usual, but it also has a battery that gives you extra assistance. It’s all the fun of cycling without having the worry of sweaty mascara and steep hills. Well, that’s how I pictured it.

Cycology is one of the leading importers of a wide range of big, small, light, heavy, fast and slow(er) electric bicycles in South Africa and they recently allowed me to take one of them on assignment to Oudtshoorn to give it a spin during the KKNK, a festival renowned for its lack of parking, closed-off streets and far-apart theatre venues. It seemed like the perfect way for my seriously unfit state to get around fast and stylishly.

My weapon of choice was the A2B Kuo. It’s the smallest of the bikes and it folds up to fit into a car and the small office space that I shared with the other journalists easily.

The Kuo folded up.

The Kuo folded up and in my boot. Easy.

Of course, having the battery stuck to it makes it a little heavy. It was a bit of an effort to lift it up and into the boot, but it’s not impossible for a girl to manage. It folds up easily, no screws, bolts or tools needed.

So off I went through town. With the Kuo specifically, the motor kicks in when you start peddling. It takes a moment to get used to, but as soon as you do, it’s pretty awesome accelerating faster than a car when the light turns green. Off course, it only lasts for about a second.

The Kuo also has a throttle that you can turn to tell the motor to kick it. This means you can accelerate from a stationary position without even peddling.

Being the smallest of the electric bicycles, the Kuo hasn’t got as much power as the bigger ones. You’ll definitely go faster by peddling than by simply pulling on the throttle. I whizzed around town effortlessly, a lot of the time not even having to peddle at all.

This is the one reason why I never cycle anywhere. I can’t stand the thought of struggling up a hill, perhaps even getting off and pushing. It’s simply too embarrassing. Oudtshoorn has one pretty steep hill that separated my house from the office, so I had to get up it at least once a day. The Kuo needed the motor and a dash of peddling to get me up at a decent speed, but it felt like peddling a normal bicycle on a straight road, no strain whatsoever. For this reason alone, I would say that the Kuo is a win.

The Kuo is pretty classy. It’s very sleek and small and the bar that goes across sits quite low, making it really easy for girls to get on without having to swing their legs in the air. Its slim appearance may discourage bigger men, but it won’t break under you. It may just go a little slower and they battery will run out a little quicker.

How far before you have to charge: 40km

How do you charge? Simply remove the battery and plug it into a wall socket for six hours.

Price: The Kuo goes for R14 500 and it’s the cheapest of Cycology’s imported bikes

As simple as that.

Cycology inspires a life on two wheels; a life lived outside the confines of a car and a way to go about your daily commute without traffic, carbon emissions and noise. The Kuo is great for taking on a train or a bus with you. Just bare its a18km weight in mind before attempting the metro rail’s million little stairs.

If you’re not ready to invest in an electric bicycle yet, you can also explore the street of Cape Town on the top of the range model by visiting the Mount Nelson. These tours cost R950 a person and will take you on either a historic, a cultural or a design tour of the city. 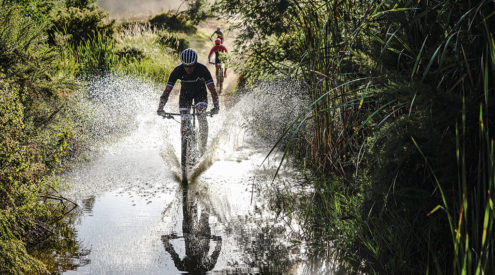 8 places you must take your mountain bike

Whether you're heading to Durban, Gauteng and Cape Town or the Garden Route, there's lots... read more

In the midst of one of Australia's most drastic heatwaves yet, both locals and animals... read more

Photos: Cairo to Keurbooms on a bike

In January, four South Africans set out from Cairo on their heavily-laden bikes to get... read more
PREV ARTICLE
NEXT ARTICLE