Wildlife photographer, Sam Rowley, captured a hilarious image of two mice brawling on the London Underground. The photograph was submitted to London’s Natural History Museum for the LUMIX People’s Choice Award 2019 in the annual Wildlife Photographer of the Year competition.

The image, ‘Station Squabble’, shows the mice in a very convincing and human-like fist fight.

Lying in wait on the platform of a London underground station @SamRowleyPhoto saw these two mice taking the term 'food fight' to another level.

Do you think this should win the @LumixUK #WPYPeoplesChoice Award? See the shortlist and cast your vote here: https://t.co/lsbaVORcpP pic.twitter.com/kwAb7DRobq

This was not the first mouse fight Rowley had seen; he’d noticed the mice fighting over food a few times before. To photograph the mice of the London Underground, he had to lie on the platform and patiently wait.

The action was well anticipated, as this altercation is said to have only lasted ‘a split-second’. Apparently the winning mouse snatched the coveted crumb, which was the cause of all the fuss, before they went their separate ways.

More than 48,000 images were submitted to the Natural History Museum. ‘Station Squabble’, along with 24 other photographs, was shortlisted for the Lumix People’s Choice Award.

Voting for the Lumix People’s Choice Award is open until 4 February 2020. In addition to ‘Station Squabble’, some of the shortlisted photographs include a leopard seal stalking a penguin, a surprised cheetah, and a 1970s Ford Pinto depicted housing some playful racoons.

All the photographs can be viewed on the Natural History Museum’s website and the public is invited to cast its votes there too.

Why are baby ellies so clumsy?

Elephant calves are notoriously clumsy, and adorably so. But have you ever wondered why?... read more 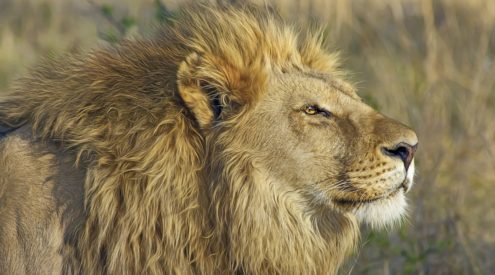 Woman mauled to death by lions in Limpopo

Albinism is a genetic disease that inhibits the production of melanin, the natural pigment responsible... read more
PREV ARTICLE
NEXT ARTICLE