Two swimmers enjoying a snorkel in the water just off Frank’s Beach (just next to Fisherman’s Beach) in Simon’s Town were joined by a curious Humpback whale who circled them happily while feasting on krill.

‘I was snorkeling/free-diving just off of Frank’s Beach near Simon’s Town. There were a number of Humpback whales blowing and logging in False Bay but one smaller whale kept coming really close to shore in between the rocks and kelp beds of Frank’s Beach. The whale was feeding on plankton and would swim in very close to shore often approaching us directly from below the surface. It would watch us from below lying still in the water, it would then pump its tail and open its mouth wide taking a giant gulp of water to feed on the plankton. The whale would circle around us for a few minutes before moving into deeper water again. We would then wait about five minutes and he would circle back into the little cove to investigate, swim with us and feed again,’ says Clyde Thomas, one of the lucky swimmers.

Thomas managed to capture an amazing video of the experience:

Today was World Oceans Day and celebrated protecting our planet’s oceans and the amazing creatures that live in them. I had one of the most amazing experiences of my life when my dream to free dive with a whale came true today. This amazing Humpback Whale was feasting on plankton in a little cove.

‘It has been a dream of mine to swim and dive with a whale for a while. I have often paddled with whales but there is always so much activity being missed below the surface. It was a huge bucket list item for me to interact with a whale below the surface and see what they are doing. It was amazing to swim and dive along side the whale as he moved gracefully through the water. Above the surface he looked like quite a small whale, which he was, but below the water he was huge but still graceful,’ says Thomas. The whale and swimmers as seen from above.

The majestic animal was relaxed around the swimmers and showed no signs of shyness as it swam back and forth trying to get a closer look at them.

Many people might feel frightened while in the water with such a huge creature, but Thomas says he wasn’t concerned at all.

‘I felt safe the whole time and was never scared of the whale. He was very relaxed and calm and inquisitive. Sometimes I had to swim out of his way when he lined up on us as I could see he was about to take a giant gulp of water and I didn’t want to be directly in front of him when he did it. But I would just swim a few feet to either side of him so I could be parallel with the whale.

‘Sometimes while I was waiting on my own for him to come back in to the shallows and I wasn’t sure where he was, my mind would start to wonder about sharks and I kept staring into the abyss to make sure there weren’t any close by,’ says Thomas. This magical experience is one many dream of and will definitely stay with these two friends for years to come.

‘The whale was incredibly relaxed the whole time. He was not phased by us at all and was quite inquisitive. He interacted with us for close to an hour until we got too cold and had to get out of the water. Even after we got out the water he kept circling and feeding in the little cove, almost waiting for us to come back in.

‘I would take any opportunity I could to swim with a whale, I do not think it would ever get old,’ says Thomas. 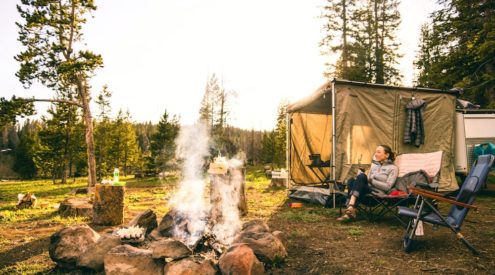 The hottest camping gear out there

Camping is a great adventure and having the right gear (and nifty accessories) will make... read more

Lightweight hiking shoes have the advantage over bulkier boots in their breathability, flexibility and versatility.... read more

Up in arms about wearable tech? We sussed out five of the most durable watches... read more
PREV ARTICLE
NEXT ARTICLE