Bubble tea, also known as boba or pearl milk tea is a popular drink in many parts of the world and bubble tea shops have popped from the USA to South Africa. The creamy tea with its tapioca balls at the bottom is said to have originated at a little teahouse called Chun Shui Tang in Taiwan in the 1980s. I visited the teahouse in Thaichung on a recent trip to the city to experience the 2020 Taiwan Lantern Festival and, having never tasted bubble tea before, I was delighted to have discovered a new favourite.

The milky drink which has morphed into multiple versions (both hot and cold) was first created by Hsui-Hui Lin, one of Chun Shui Tang’s employees in 1987, when she accidentally put tapioca balls (often used in desserts) in milk tea. The combination worked and the dividing line between tea and dessert was broken.

A narrow staircase leads down into the teahouse which has worn wooden door frames, chairs and tables which give the restaurant a welcoming atmosphere. Flowers, paintings and display items make it similar to teahouses in the Song Dynasty, according to its owners.

I enjoyed a cup of original pearl milk tea. The soothing warmth with frothy milk and the addictive tapioca balls which I scooped up with a teaspoon really had me sold on boba. You can order this drink cold, too.

Drinking my first cup of bubble tea (also known as pearl milk tea or boba) at Chun Shui Tang, the teahouse in Taiwan where it was first invented in 1987. #bubbletea pic.twitter.com/aYRL5ycS0F

I have no doubt that had I been living in Thaichiung, this would have become one of my favourite spots to enjoy a cuppa. In addition to the food and drink on offer, the lighting is warm and welcoming and invites you to linger. 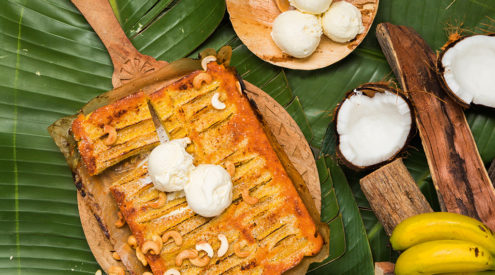 The secret ingredient of this cake is potato, which adds both a creamy texture and... read more This is the classic if you’re on the coast, served with fresh crusty bread and... read more 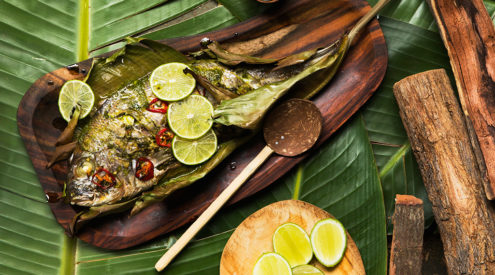 This simple yet delicious recipe is a celebration of all things Mozambique. Wrapping fish in... read more
PREV ARTICLE
NEXT ARTICLE